For more than a decade, FSM Group has provided a diverse array of administration and project management services for airport fuel facilities, ranging from small-scale storage and distribution facilities to large-scale jet fuel storage and hydrant system expansion projects associated with airport terminal development. Our specialty lies in developing the business models and technical requirements for jet fuel and ground fuel infrastructure. With a depth of combined experience in the engineering and financial fields, our management team provides the expertise and insight needed by our valued clients. 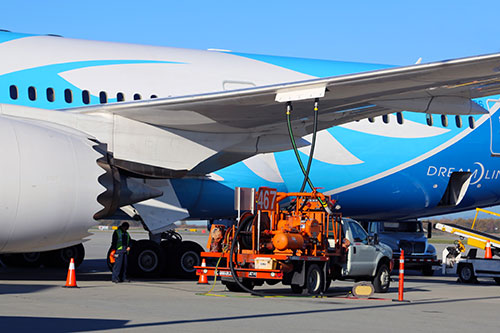 FSM Group currently manages in excess of $500M in financing on behalf of fuel facility consortiums in North America. For more information about fuel consortiums and how we can assist your airport or airline with its fuel distribution and management needs, please contact:

Rising aviation fuel costs have made effective management and efficient distribution of aviation fuel supplies an industry priority. Aviation fuel costs constitute up to sixty percent of an airline’s operating expenses. At airports throughout North America, facilities and equipment necessary for the refueling of aircraft at the terminal area are most often owned by a Fuel Consortia, a not-for-profit corporation. The consortium allows any airline that flies to a participating airport to join as a member. Member airlines share in the net costs of the corporation, which generally equates to a cost savings for the entire membership. Refueling of non-member airlines is provided at a rate that is higher than the member airline rate, with the increased cost as an offset to the commitments member airlines have undertaken.

Airports benefit in many ways when fuel consortiums are owned and operated by airlines. The need for airport staff expertise is reduced when the design, construction and operation of fuel facilities and infrastructure is undertaken by the consortium relieving the airport of those responsibilities. It is also easier for an airport to work with a consortium with regard to lease terms and master planning.

Fuel Consortiums in the USA

The traditional arrangement at an airport is that fuel suppliers have tank farms and distribution systems that are proprietary to their product and service. The distribution system at many non-consortium locations is by tanker truck, therefore, the supplier will have a tank farm to receive and store jet fuel and tank trucks to move fuel from the tank farm to the aircraft of their customers. This is the system that is seen in most, if not all, non-North American locations and at most small locations in North America. The attraction of such an arrangement is that the suppliers can get into business on the airfield for a relatively low capital investment.

Many years ago, the major airlines in the United States of America organized themselves to form what is now known as fuel committees. The goal of organizing themselves into a committee is to achieve the optimal economic advantage for the group, each member, and to achieve the lowest environmental impact for the operation. In such an arrangement, the fuel committee, which is really a consortium of member airlines, will invest in the tank farm to receive and store the fuel, and a hydrant system that takes the fuel underground right to the gates on the airfield. The environmental advantage is that there are far fewer tank trucks operating on the airfield. The economic advantage to the airlines is that the tank farms are open to all suppliers of jet fuel, without duplicate capital investment to accommodate additional supply sources. The operating costs of a hydrant system are much cheaper than operating a fleet of tank trucks. The capital investment for the construction of a hydrant system prevents smaller airports from going into the consortium arrangement.

Make the connection, get in touch.

A thorough understanding of aviation and ground fuel industries is the key to innovative solutions. Contact us to learn more about how we can help you.